35 Years in the Making, Pioneering Malaria Vaccine is Poised for Widespread Deployment

Last year, the World Health Organization (WHO) recommended the first-ever malaria vaccine – RTS,S – for widespread use in sub-Saharan Africa, where nearly half a million children die each year from the mosquito-borne disease. This historic recommendation paved the way for Gavi, the Vaccine Alliance, to invest over $150 million in the deployment of this four-dose vaccine.

A vaccine 35 years in the making, RTS,S is now poised for the first phase of widespread deployment. This vaccine is not considered a silver bullet to end malaria; but in large-scale pilots, it has proven to reduce life-threatening, severe malaria among children by 30%, and up to 70% when the vaccine was combined with malaria prevention drugs. These findings highlight the vaccine’s potential, particularly as a highly effective complementary tool administered alongside other proven interventions.

Over 1 million children in Ghana, Kenya, and Malawi have already received at least one dose. Over the past 3 years, the pilot projects have demonstrated the vaccine’s safety and underscored strong community demand. Full-scale deployment of the vaccine will save tens of thousands of lives each year from malaria, which claims the life of a child nearly every minute. But a series of critical next steps must take place before RTS,S becomes a staple of childhood immunization programs across Africa and beyond. 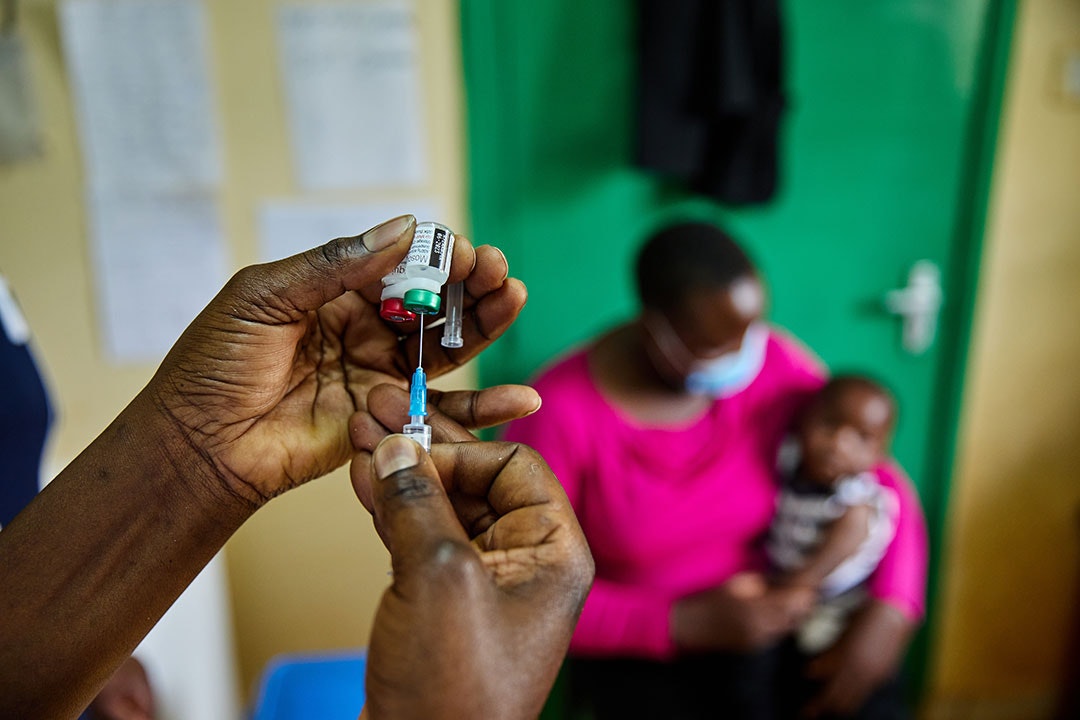 Prioritizing the most vulnerable children

Since this is the first-ever malaria vaccine, global demand is expected to be 80-100 million doses per year, according to PATH, which helped develop the vaccine.  However, in the short term, supply is expected to reach only 15 million doses annually. Therefore, this initial rollout of vaccines must prioritize the most vulnerable and high-risk populations, such as children with limited access to malaria prevention services or who live in dense, high-transmission areas. This requires close coordination between national immunization and malaria control programs, and global partners to identify the most at-risk, under-resourced communities. A mother and child inside their home at the Yusuf Batil Refugee Camp in South Sudan, near the Sudanese border. Photo credit: UN Refugee Agency.

Global donors like Gavi, the Global Fund to Fight AIDS, Tuberculosis and Malaria (Global Fund), and Unitaid are supporting procurement and deployment costs. But countries must find sustainable sources of funding to cover supply chain and delivery needs, community-level training and monitoring, and support for communications efforts to promote the vaccine.

Additionally, educating parents about the safety and benefits of RTS,S will be vital. RTS,S is not only a new vaccine, but it also requires four doses. Social behavior change programs must stress the importance of receiving all four doses to maximize the effectiveness of the vaccine.

With second-generation malaria vaccines currently in development and undergoing trials, RTS,S represents the dawn of a new era in the fight to eradicate this ancient disease. As we commemorate the Day of the African Child, Shot@Life and United to Beat Malaria applaud this pioneering vaccine as a positive step forward in accelerating Africa’s Agenda for Children 2040 by “fostering an Africa fit for children,” where every child can survive and have a healthy childhood.