Olympia Ramclam has been a microscopist in Belize since 1990 and has detected thousands of malaria cases over the years. She’s seen the steady improvement of malaria control and elimination in her country – “from one thousand plus cases, in early 2000, to zero cases at present.”

“I started working in 1990, and can recall so many challenges. We encountered, for example, transportation, malaria boxes, we had to recycle slides, visits was like one time every two weeks, we used to have shortage of staff, the microscope it were very old, we didn’t have any lab coats, and other challenges,” Olympia said.

In addition to the laboratory personnel, the vector control teams in Belize also faced significant challenges.

“To reach to the remote areas they used to give me stories about crossing the rivers, they used to have to camp out there, and eat only bread. You know? They suffered just like the patient. And having a lot of malaria, we couldn’t, we didn’t have the capacity to supervise the treatment of the patient when they’re positive. So we leave the treatment of the patient, in care of the health worker,” Olympia said. “Now we are doing supervised treatment. The vector control personnel is in charge of going and doing a 14-day treatment. So that is a much improved treatment policy from the one in the 1990s, early 2000.”

Olympia leads a team of malaria-focused microscopists who work with health systems and vector control teams to ensure febrile patient are being tested for malaria throughout the country, particularly in remote communities where the risk is highest.

Learn more about Olympia’s story in this film: 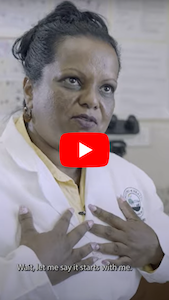