Today, the Board of Gavi, the Vaccine Alliance, made the historic decision to invest $155.7 million in the first-ever malaria vaccine program over the 2022-2025 period. The RTS,S malaria vaccine is a significant scientific advancement and has the potential to save thousands of lives of those at greatest risk, especially children throughout sub-Saharan Africa. Shot@Life and Nothing But Nets stand together in support of today’s decision, which marks an encouraging step forward in the fight against malaria and in efforts to improve global health overall.

Gavi’s decision to invest in the first-ever World Health Organization (WHO) recommended malaria vaccine is a historic and promising development. The new malaria vaccine is a welcome and complementary addition to the malaria-fighting toolkit. Commitment to innovation, along with increased funding and political will to improve access and quality of health services, will propel us towards a malaria-free world.

“Today marks an important milestone in our fight against malaria,” said Dr. Seth Berkley, CEO of Gavi, in a statement following the decision.

Why a safe, effective vaccine is needed: Malaria kills hundreds of thousands of children every year

Malaria is one of the deadliest diseases for children under five years of age, killing hundreds of thousands of children every year. In 2019, there were 229 million cases of malaria and 409,000 deaths, with Africa carrying over 90% of the disease burden. Moreover, half of global malaria deaths occurred in six nations —  Nigeria, the Democratic Republic of the Congo, United Republic of Tanzania, Burkina Faso, Mozambique and Niger —  all of which are eligible for support from Gavi. In sub-Saharan Africa, a malaria vaccine program could avert thousands of childhood deaths.

“This is a historic moment. The long-awaited malaria vaccine for children is a breakthrough for science, child health and malaria control. Using this vaccine on top of existing tools to prevent malaria could save tens of thousands of young lives each year,” WHO Director-General Dr Tedros Adhanom Ghebreyesus said at a press briefing in October 2021 when WHO issued a recommendation for wider use of the new malaria vaccine to prevent malaria in children living in regions with moderate to high disease transmission.

Since 2019, a WHO-coordinated pilot implementation program of the new malaria vaccine has reached more than 800,000 children in Ghana, Kenya, and Malawi and showed that the vaccine can reduce severe malaria in children by 29 percent.

A vaccine alone is not enough: All available tools are needed to fight malaria and save as many lives as possible

The need for new tools in addition to those currently recommended has been widely recognized as essential to achieving the global goals related to reductions in malaria. For instance, the WHO’s pilot implementation program showed that the vaccine could extend the coverage of malaria control, reaching two-thirds of children not sleeping under insecticide-treated nets. Moreover, it also found that layering malaria prevention tools resulted in over 90% of children at risk benefiting from at least one intervention.

Investment and deployment of current and new innovations are key to reaching as many children as possible with life saving interventions. Important and cost-effective tools already in the tool box include insecticide treated mosquito nets, indoor residual spraying, rapid diagnostic tests, and malaria preventive treatment. The new malaria vaccine should be seen as a complementary tool, and not a substitute, for other proven malaria control interventions, and could help us get the malaria fight back on track.

The use of multiple tools will require coordination between malaria control and immunization programs at global and country levels to ensure impactful deployment of the vaccine alongside other interventions. The Ministries of Health in the pilot program countries have administered 2.3 million doses of the new malaria vaccine, demonstrating how national malaria and immunization programs can work together to effectively deliver the new malaria vaccine through routine child immunization services.

“We look forward to working with global malaria stakeholders to make sure that countries are able to implement this promising tool in the fight against malaria,” said Berkley. 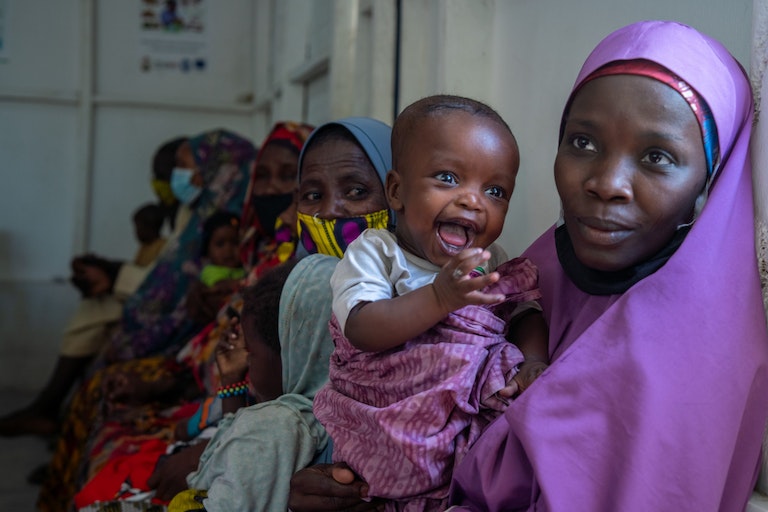 The RTS,S malaria vaccine is given in a schedule of four doses in children from five months old. Photo: NBN/Sani Adamu Musa

With today’s approval of the malaria vaccine program, there are several next steps to be taken. Gavi and stakeholders in malaria endemic countries and globally will launch program design immediately. Deployment of the vaccine will require many critical next steps, including technical guidance from WHO and an updated Gavi co-financing policy and launch of application materials. A Gavi-funded malaria vaccine program will be integrated into the global malaria funding ecosystem and would closely coordinate with existing stakeholders, such as UN partners, the Global Fund to Fight AIDS, Tuberculosis and Malaria and the U.S. President’s Malaria Initiative, to leverage existing activities.

The malaria vaccine is the very first vaccine against a parasite. The hope is that it will not be the last and that this development paves the way for additional vaccines, many of which are already in early stage R&D. Today’s decision will likely serve to incent the development of other vaccines and disease-fighting technologies. Gavi’s market-shaping potential —  proven with other vaccines, including COVID-19 —  could reduce total cost over time.

Gavi’s important and historic decision today continues its work of ensuring access to lifesaving vaccines and protecting the world’s most vulnerable from disease. Those are goals that Shot@Life and Nothing But Nets share.

Today’s news is further proof of how well the Gavi model works to protect children living in the poorest countries against infectious disease by increasing access to lifesaving vaccines, given that from 2000-2020 Gavi has helped vaccinate more than 1.9 billion children and thus prevented 15 million deaths.

Today’s historic decision is an important step forward and gives hope that many children living in malaria-prone areas will be protected and grow into healthy adults.

Shot@Life has worked for the past decade to ensure that children around the globe have access to lifesaving vaccines. It has helped double the United States’ annual investment in global vaccine programs to $5 billion. Together with corporate partners, Shot@Life has helped deliver an additional 108 million vaccines to children in some of the hardest-to-reach communities in the world. Malaria especially impacts those living in communities facing exclusion, and Shot@Life is committed to reaching every child, everywhere to end vaccine-preventable deaths.

Over the last fifteen years, Nothing But Nets has helped protect more than 30 million of the world’s most vulnerable people from malaria. The campaign has effectively raised awareness and voices to advocate for increased U.S. leadership and funding for the UN, U.S. President’s Malaria Initiative and The Global Fund to Fight AIDS, Tuberculosis and Malaria. Collective efforts have contributed to a significant period of progress in the fight against malaria: since 2000, the malaria mortality rate has been cut in half and 7.6 million lives have been saved.