For the first time in over two years leaders in the fight to end malaria gathered on Capitol Hill in honor of World Malaria Day 2022. Hosted by the Malaria Roundtable, the Congressional Caucuses on Malaria and Neglected Tropical Diseases, United to Beat Malaria and Malaria No More, the reception brought together policymakers, business leaders, civil society partners, the scientific community, and global advocates to celebrate U.S. leadership in the fight against malaria.

With this demonstration of support for PMI and the Global Fund, we are hopeful the United States will continue to lead the global community in its support of malaria elimination programs. Thanks to historic bipartisan U.S. leadership, significant progress has been made over the last two decades: 10.6 million lives saved, 1.7 billion cases averted, and over 20 countries have reached zero cases of malaria. As the U.S. prepares to host the Seventh Replenishment of the Global Fund later this year, renewing Congressional commitment to beating malaria continues to be a priority.

As the COVID-19 pandemic continues to impact malaria-endemic countries, we know that investments in malaria programs like PMI and the Global Fund will move the world closer to ending history’s oldest pandemic – malaria – while empowering health systems to best respond to outbreaks like COVID-19.

Noted by both Senators Chris Coons (D-DE) and Roger Wicker (R-MS), investments in malaria elimination programs are beneficial to the U.S. in terms of national security by protecting armed forces, strengthening national stability in malaria-endemic countries, and safeguarding the U.S. from new and emerging pandemics.

Her Excellency Madam Ellen Johnson Sirleaf, former President of Liberia, dubbed Africa’s Iron Lady for her fierce tenacity in championing public health priorities across the African continent, riveted the crowd with her remarks. She commended the role of community health workers in the fight against malaria and delivered a passionate call to action for continued US investments to hire and train thousands more of these vital frontline workers to beat malaria in our lifetimes. “Investing in community, in primary healthcare” she said “is critical to responding to and ending strong epidemics and pandemics including before they explode. Threats to public health and the fight to overcome them are won or lost on the front lines.” 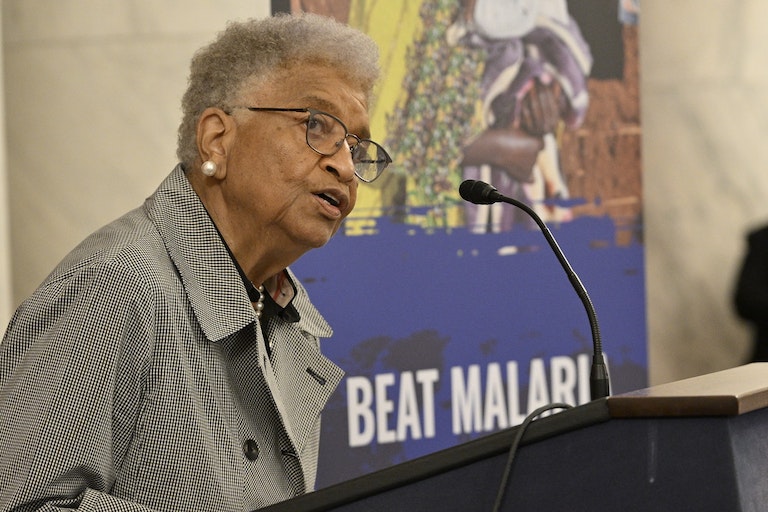 Ambassador Samantha Power, USAID Administrator,  recounted the United States’ long history of spearheading the global fight against malaria, the world’s oldest pandemic. She warned of the stalled funding for malaria interventions seen in recent years, but encouraged that, despite the setbacks brought about by COVID-19, we have seen some major wins in the fight against malaria, including the elimination of malaria within the borders of El Salvador and the WHO’s recommendation of the first malaria vaccine in 2021. Powers’ remarks included a passionate call to action: “We have a chance to finally end our enduring battle with this disease. Amid all else that ails this world, let us not waste that chance.” 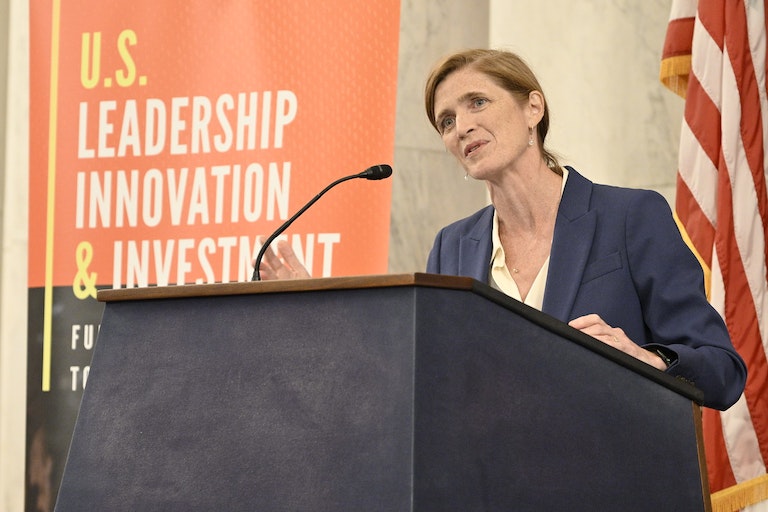 Julie Wallace, Acting U.S. Global Malaria Coordinator, leading the President’s Malaria Initiative (PMI), echoed this sentiment, celebrating the progress made with U.S. leadership to combat malaria since 2000 while acknowledging that this progress has plateaued in recent years and that we must redouble our efforts to avoid slipping backward. 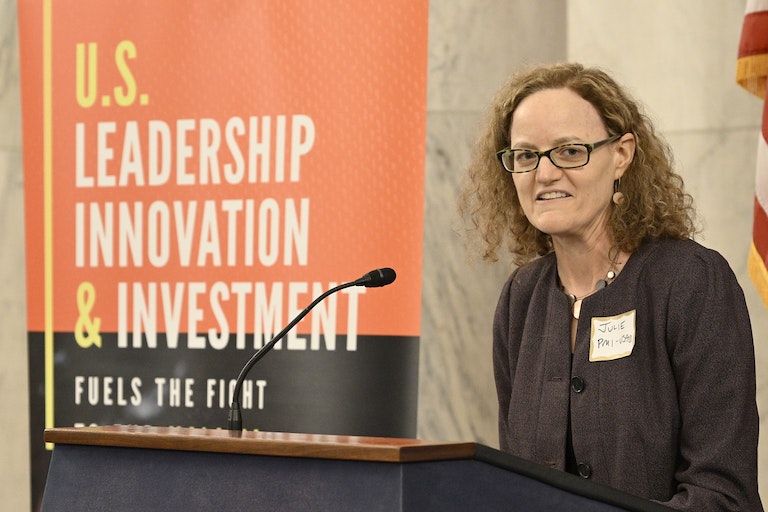 Dr. Donald Kaberuka, Chair of the Global Fund Board, celebrated the great strides made against malaria over the past two decades and praised the US President’s decision to host the Global Fund’s seventh replenishment which kicks off this Fall. Dr. Kaberuka explained that we are at a critical juncture in the fight against malaria. The COVID-19 pandemic disrupted progress and it is more important than ever that we have a fully funded Global Fund, prepared to tackle new and emerging challenges. 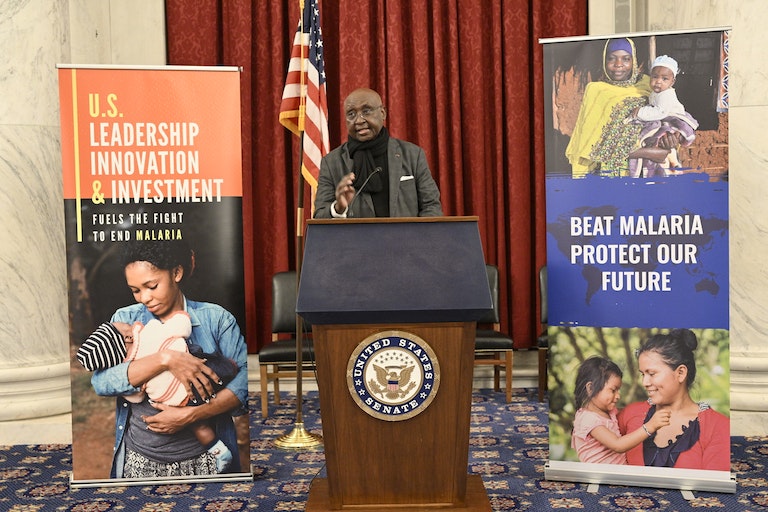 We also heard remarks from Dr. Larry Walker, Director of the National Center for Natural Products Research at the University of Mississippi’s School of Pharmacology, who was recognized by Senator Wicker for his research contributions to the development of antimalarial drugs conducted in collaboration with the Walter Reed Army Institute of Research. 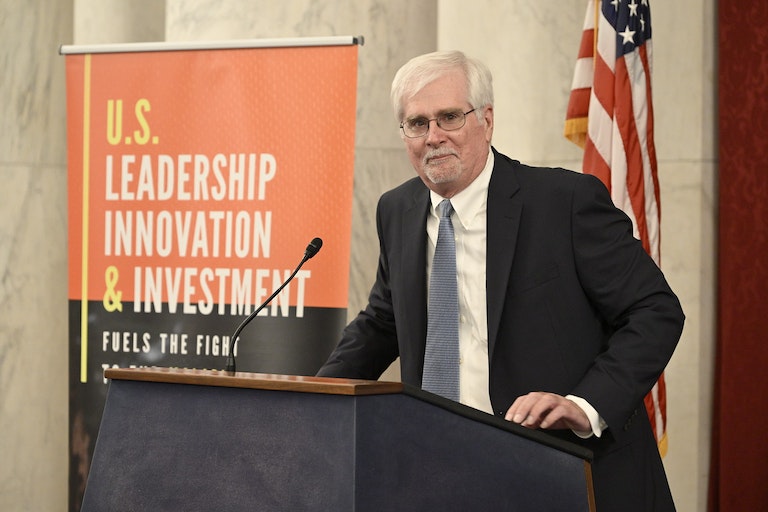 United to Beat Malaria Executive Director Margaret Reilly McDonnell closed out the evening on an inspiring note, stating “the U.S. continues to be a leader on the global stage and in the fight against malaria and that’s one of the things that makes me proudest to be an American. It’s one thing that helps me sleep at night as a mother, knowing that we are working so that parents around the world don’t have to worry about their children getting sick and dying from a mosquito bite. It is unacceptable. Working together we can be the generation to beat malaria for good.” 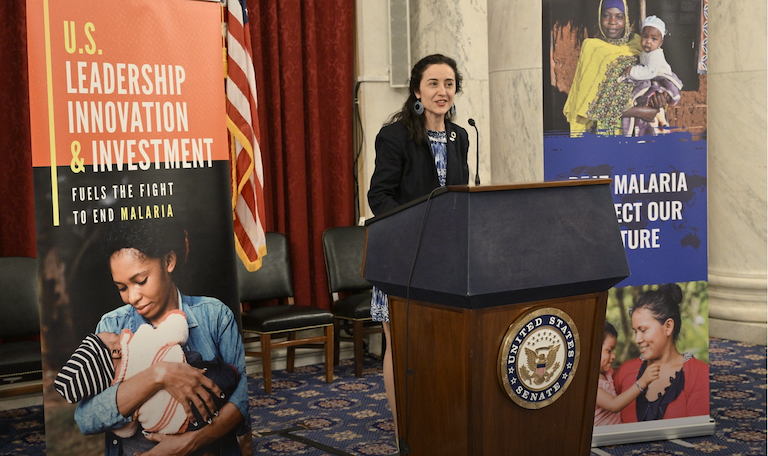 Special thanks again to our co-sponsor Malaria No More and to our partners: The American Society of Tropical Medicine and Hygiene (ASTMH), Christian Connections for International Health (CCIH), Friends of the Global Fight, The Global Health Council, and PATH.