A Groundbreaking New Tool in an Age-old Fight: WHO Recommends Malaria Vaccine for Vulnerable Children

In a historic announcement, the World Health Organization (WHO) today recommended widespread immunization of children across sub-Saharan Africa and elsewhere with the world’s first vaccine against malaria to advance beyond pilot and testing phases. Sub-Saharan Africa is home to more than 90 percent of malaria deaths worldwide, with many areas of moderate to high transmission. The recommendation is based on results from an ongoing WHO-coordinated pilot program of the RTS,S vaccine in Ghana, Kenya, and Malawi that has reached more than 800,000 children since 2019.

“This long-awaited malaria vaccine is a breakthrough for science, child health and malaria control,” said WHO Director-General Dr. Tedros Adhanom Ghebreyesus in today’s press briefing. “Using this vaccine in addition to existing tools to prevent malaria could save tens of thousands of young lives each year.” RTS,S has been proven to significantly reduce life-threatening, severe malaria among children by 30 percent.

To date, the Ministries of Health of Ghana, Kenya, and Malawi have administered 2.3 million RTS,S vaccine doses through this pilot program, showing that routine child immunization services can be used strategically and effectively to deliver the malaria vaccine. The pilot demonstrated the vaccine’s safety and underscored strong community demand. These findings highlight the potential of adding a vaccine to the array of proven, existing malaria tools that can be used to fight this disease and accelerate the pace of progress against malaria across Africa and beyond.

“We celebrate the historic milestone of the first-ever recommended vaccine for malaria. This promising new tool to protect children, who are most vulnerable to malaria, must complement existing, cost-effective, proven interventions like mosquito nets, indoor residual spraying, fever testing, and malaria treatment,” said Margaret Reilly McDonnell, executive director of the United Nations Foundation’s Nothing But Nets campaign. “Innovations like this, coupled with increased political will, funding, and commitment move us closer to a malaria-free world.”

While malaria deaths have been cut in half since 2000, this recommendation—based on the advice of WHO’s global advisory bodies for immunization and malaria—comes at a time when progress against malaria has stalled or reversed in some areas.

Malaria continues to be both a cause and effect of poverty and inequality. WHO and partners have called for new tools, including malaria vaccines, to help get malaria control efforts back on track, improve child health, and save lives. Layering the malaria vaccine with other highly effective prevention tools, such as mosquito nets, indoor residual spraying, and wider community case management can increase equity in access to malaria prevention and help us reach those that are being left behind.

Data from Chileka Health Centre in Lilongwe, Malawi, where the RTS,S pilot took place, indicates a decrease in hospital admissions for malaria illness among children under 5 since the vaccine was introduced. Health workers say this drop may be due to the malaria vaccine, which has also improved the routine immunization uptake. Before the pilot, most mothers would stop clinic visits when their children got their last jab of measles at 15 months. The malaria vaccine has extended the immunization period to 22 months for the RTS,S fourth dose, allowing growth monitoring and general health checks at these visits, which help detect preventable health threats in young children. 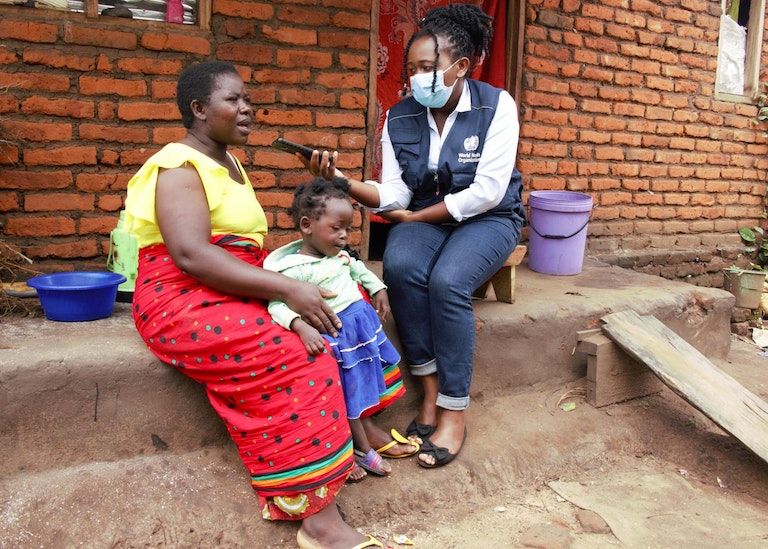 Clara Magalasi, who lives in a rural village near Lilongwe, the capital city of Malawi, speaks with a WHO worker. Photo: Hudson Kubwalo/WHO Malawi

Clara Magalasi, who lives in a rural village near Lilongwe, the capital city of Malawi, walked four kilometers to Chileka Health Center to take her 22-month-old daughter Grace Butawo for her fourth and final dose of the RTS,S malaria vaccine.

“I understand that if my child gets all four doses, the vaccine will give her the most protection against malaria and severe malaria. Ever since Grace was born, she has never suffered from malaria, unlike my other children who experienced a lot of malaria episodes when they were the same age as Grace,” said Clara.

Malaria elimination requires a combination of complementary innovative tools and approaches tailored to local contexts to avoid a one-size fits all approach. This breakthrough is built on more than 30 years of research and development by technical partners with the collaboration of in-country and international partners.

The next step is for countries with high rates of malaria to choose to adopt the vaccine as part of their national malaria control programs, and for global health funding bodies to consider how they might financially support these efforts.  Both will be key to reach the last mile of the malaria fight.